Colin Powell appears ready to endorse a candidate and it's likely he'll pick Barack Obama in what may be a bit of a coup de grace to McCain's flailing campaign.

Although it's possible Powell will endorse John McCain this is unlikely since Powell remains a key player in global affairs and he'd be throwing that away for at least the next 4 years with a McCain endorsement.

As a moderate Republican Powell's credibility remains high and he's likely to sway at least some of the type of moderate middle class voters Obama would benefit from.
Posted by Joseph Hunkins at 3:28 PM No comments:

Yes, Obama was born in the USA. Here's the birth certificate issued by Hawaii. Note at the bottom that this is considered "primae facie" evidence in any court of law.

Here is even more detail (including the Certificate number which was blacked out in this copy)* for those of you gullible enough to believe Jerome Corsi is not manipulating the evidence to smear Obama unfairly, which seems to be his main objective with the book "ObamaNation". 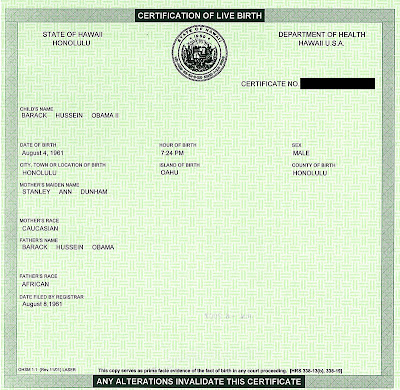 Posted by Joseph Hunkins at 2:09 PM No comments: