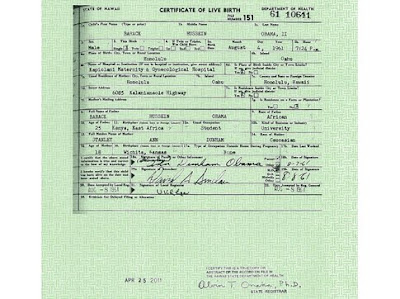 Over at Travel and History I've written a short "History of the Democratic Party", focusing mostly on presidents and briefly tracing the history of the democratic party from inception in the late 1700s to modern times with the election of our latest Democratic President, Barack Obama, who coincidentally just released a better copy of his birth certificate ... today.
Although the "birther"arguments have always been pretty dumb, it was also been odd that the Obama camp worked so hard to avoid releasing the "vault copy" or original certificate. My working hypothesis about that was that the original birth certificate probably was lost or defaced or contained something compromising which might have made greater trouble than simply stonewalling, but the release of this latest long form birth certificate official copy from Hawaii suggests that was wrong and there was nothing at all to hide. One would think the Obama election team would have waited until closer to the election to let the frothy nonsense continue, so perhaps they have decided this was eating into his popularity enough that waiting any longer was unwise.
In any case, it looks like the 2012 Presidential Election will now be pretty much in full swing, though as David Brooks suggested recently it's very hard to imagine anybody in the current field of candidates giving Obama much of a run. I think Romney is the most likely nominee and arguably has a shot, but a lot can happen in the coming months as Republicans work the dreary Iowa farms and fields to line up early support, effectively copying the brilliant strategy of the Obama 2008 early campaign juggernaut.
Posted by Joseph Hunkins at 12:16 PM

12bet Archives - Hakkasino.com
14bet.com is one 더킹카지노 of the most interesting casinos in 12bet Malta. 11bet They offer a variety of slots and live dealer games. The game selection is diverse